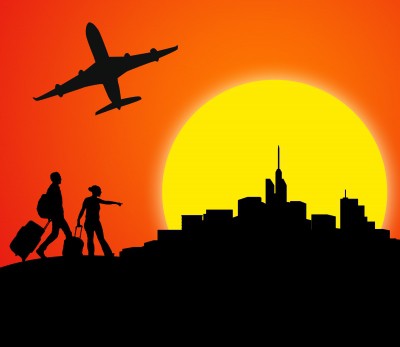 There’s an old model to life. You get a job that requires the majority of your waking hours, buy a big house out in the suburbs with a large garage to park your two cars, drive 30 or 60 (or more!) minutes to work, spend at or above your means, and live this lifestyle until you’re pretty much too old and worn out to continue.

However, there’s a new, competing model. You get the same job, live in a smaller place that’s right-sized for your needs, live much closer to work so that you can possibly use public transportation, walk, or bike (or at least drive a lot less), live well below your means, and live this lifestyle for 10-15 years until you can retire early or do something else perhaps more meaningful and/or enjoyable with your life. This new model is designed to afford one financial independence early enough in life so that they can enjoy it, basically customizing life to their specific desires.

No Need To Live In The Same Place For Decades

The old model requires you to generally stick around for a while in one place. This isn’t necessarily a bad thing in and of itself, but there is a difference between being free and being not free.

Jobs are usually fixed to one location. And your home is certainly fixed as well. The two tie you to one general geographical area, limiting your freedom and options. You can try bouncing around to different jobs in different areas of the country or even abroad, but your opportunities to do so may be limited and every new job may hurt your future opportunities.

But this is what’s so wonderful about being financially independent – you’re no longer geographically challenged. You can potentially live wherever you want, whenever you want. I say potentially because you may be limited by other circumstances like family or other obligations, but not being responsible to your local Corporation X or whatever means you’re probably a lot more free to come and go as you please.

Imagine that. You no longer have to wake up and march down to the office, clocking in for another 8-10 hours of work that you might not completely enjoy any more. What’s then keeping you where you’re at? Where do you really want to be?

Now, I’ve lived in some nice areas. And I’ve lived in some very bad areas. But I’ve always preferred the feeling of being free to be wherever I am, rather than being somehow stuck or forced to be there. Even just knowing that you could live anywhere means you might be a lot happier staying where you’re at.

I haven’t traveled much. It’s not necessarily because I don’t want to, but probably because I just haven’t gotten around to it. In addition, I’m also not much of a fan of the typical travel model as an American where you take your one week or two weeks off during the year and hit up some all-inclusive resort in another country. That’s not traveling. Getting waffles made for you by a hotel staff in Australia rather than making your own in the comfort of your own kitchen isn’t “traveling”, at least not to me.

However, I do quite like the idea of slow travel, whereby you live in a country for a year or two or however long you want and feel comfortable with. This gives you an opportunity to really get a feel for another culture. You can live in the areas that local people live, do what they do, eat what they eat, and get to experience what life is really like (to a degree) in another country.

You could live in Thailand for a year or two. Get tired of that? Somewhere else in Asia might be calling your name. Or perhaps Europe. Wouldn’t it be fun to live in Amsterdam or Prague for a year? Then it might be on to somewhere in South America. Ecuador? Columbia? Argentina? Maybe all three. Or maybe you never leave Thailand after that fisrt year or two, living there for the rest of your life. It’s all up to you.

Where You’re At Right Now Might Already Be Exotic

I happen to find our country incredibly amazing. And I don’t think one has to travel the world to somehow magically be “interesting”. In the end, life is life no matter where you’re at. People in Japan right now are largely bustling to and from work, sneaking in time for dinner, trying their best to raise families, and probably not sleeping enough. Life isn’t really all that different there from what we know here. And that’s mostly true for civilizations and cultures all over the world, unless you’re talking about somewhere like Sub-Saharan Africa or something.

I sometimes forget that where I’m already at is exotic to other people. I get emails every now and again from Europeans (especially from Germany, for some reason) that ache to visit Florida on vacation. It’s incredibly exotic to them. The palm trees, constant sunshine, beaches, and great seafood is something they long for. Much the same, Munich or Berlin is very “meh” to them. Not in a bad way, but just that it’s home. Great cities, but not exotic or new.

This is why I actually have just as much a desire to slow travel here in the US. There are some amazing places right here in the US that I’ve never been to, that I’d love to see. And I’m secretly in search for the best city in the US where public transportation is plentiful, it’s clean, the weather is mild, it’s walkable, there isn’t much crime, the food is great, there are plenty of entertainment options for the occasional splurge, the urban planning/layout is intelligent and intuitive, the library system is well funded, the air is clean, the scenery is beautiful, there are plenty of parks, it’s not overly expensive, and the people have some character.

Not too picky, right?

I’ve got some ideas in mind as to where I might look if/when I’m no longer living in Sarasota. I love Sarasota, but I’m also ready for somewhere new. The world’s a big place and I wouldn’t mind seeing a chunk of it before I’m dead. Some of the cities that come to mind right off the bat – they don’t check off all the options, but enough to at least visit – are Miami Beach, Florida, Portland, Oregon, and Asheville, North Carolina.

The good news, however, is that I can eventually go and stay in any of these cities for a lengthy period – I could move there permanently, if I wanted. And not 30 years from now, but relatively soon. Moreover, I could check out many other cities and states as well. Maybe it’d be nice to live in Chicago for a year or two. Or Austin. Seattle. Nashville. When the city scene is too much there is plenty of wide-open space across much of the country away from the coasts. Or maybe we could RV it up for a while. The possibilities are almost endless.

Like I mentioned above, being free is wonderful in and of itself. Just knowing you can go anywhere is, in my opinion, almost as wonderful as physically going anywhere. It’s the mindset. You don’t have to go, but the key to keep in mind is that you can. You could if you want to. And maybe you will. Or maybe you won’t. Financial independence really comes down to options. Flexibility and freedom is what this is all about. And geographical independence is just one of the many examples of flexibility and freedom. It’s just another reward of being financially independent.

If you have the skills and/or the education necessary to land a high-paying job, then it might make sense to move to a big, expensive city where the jobs pay the most. Sure, housing is expensive. And everything else probably is as well. But if you can make big money for a while, contain your housing in a major way by taking on some roommates or living really small, you can probably save up a large pile of money in a hurry. Then after five or ten years of this you can move to a smaller, less expensive city where that same pile of money goes a lot further.

I never had the opportunity to do this because my job wouldn’t have paid enough in a city like, say, San Francisco to really take advantage, but I committed my own form of geographical arbitrage by moving from Michigan to Florida back in 2009. I moved to Florida for a few key reasons:

I wasn’t financially independent when I moved, but moving propelled me along the path to financial independence in a big way. As such, I can commit more geographical arbitrage later down the road when I am financially independent. For instance, it seems plausible for two to live on about $1,200/month in many cities throughout Thailand. I should be hitting that kind of dividend income within about five years. I’d be 37 years old. How about that?

Being financially independent may indeed unlock geographical independence as well. Whether or not you take advantage of that – or if you even want to – is really up to you, but the key is that you can. You could potentially live anywhere you want, assuming you have enough passive income to sustain yourself in another geography. London. Sydney. Vancouver. Rural Wyoming. Whatever. The world could literally be your oyster. But, in the end, you may already have all the oysters you could ever want wherever you already are.

What about you? Plan on slow travel once you’re financially independent? Or have you already found your own version of paradise? Have to stay where you’re at regardless due to family circumstances?