Very recently, Scottrade announced a revolutionary new dividend reinvestment program called Scottrade FRIP – which stands for ‘Flexible Reinvestment Program’. I currently use Scottrade as my brokerage firm so I took a look at this program and I think it is a great tool for those parties interested in automatically reinvesting dividends, but would also enjoy flexibility as to what securities the dividends get reinvested back into.

As I noted in an article a while back where I talked about why I do not DRIP, or automatically reinvest my dividends back into the equities that paid them out, I pointed out that reinvesting dividends in such a rigid and unthoughtful manner did not make sense to me. If The Procter & Gamble Company (PG) was significantly overvalued and I just kept plowing my dividends back into the shares every quarter regardless of this fact, instead of reinvesting that capital in a more efficient manner by choosing more attractively valued alternatives, I was really saying that value didn’t matter. And, of course, value does matter. 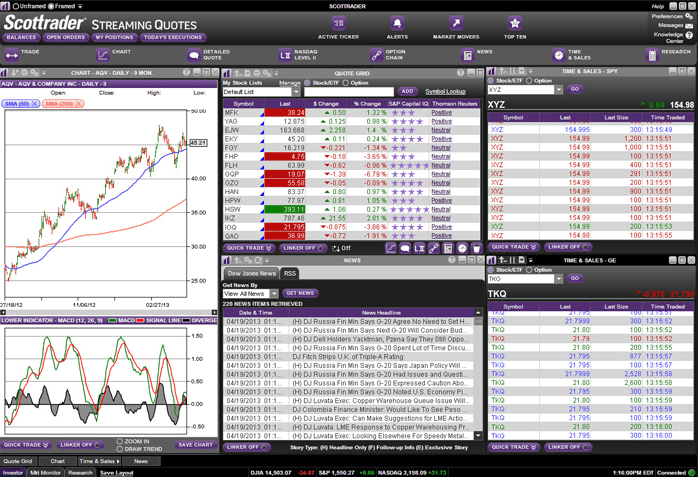 Scottrade FRIP allows you to pool dividends together to purchase up to five eligible securities at a time, commission-free. You don’t have to reinvest the dividends back into the company that paid them, and you’re not confined to pick just one company. This program could be especially helpful for those investors that are short on cash, and so instead of letting the dividends just sit idle because the amount of capital is insufficient for a purchase you can selectively invest and simultaneously bypass the $7 commission that Scottrade normally charges for a single purchase transaction. The only downside might be that you can only purchase whole shares. No fractional shares can be purchased with this program.

You can read some FAQ’s on FRIP here:

This program could also work for those that are already financially independent, but typically collect more in dividends than they’re spending. For instance, if my monthly retirement budget is $1,500 and I’m collecting a cool $1,800 per month in dividends I could keep reinvesting that excess $300 without having to incur ongoing commission fees. The flexibility of the plan is really the highlight.

Now that I’ve just talked up a fantastic program that Scottrade has unleashed, I’m going to shift gears a bit and talk about potentially opening up an account with another brokerage firm. I’m extremely happy with Scottrade so far, but I feel the need to diversify between brokerages. The reason being that almost all of my worldly wealth is tied up with one firm. If Scottrade were to go bankrupt at some point in time (highly unlikely, but possible), my account’s funds are protected by the SIPC (Securities Investor Protection Corporation) for up to $500,000. The main issue with this being if I’m one day living off of my dividend income and Scottrade goes under I’ll still be responsible for paying for rent, food, electricity and the like while the SIPC sorts everything out. Not exactly a great scenario to think about. Although I would likely have a margin of safety built up with a cash buffer to take care of monthly expenses, being reliant on that income could be devastating if the situation isn’t normalized quickly. However, if I had investments set up with another brokerage firm I would still have some income coming in while the SIPC cleans things up.

Also, the SIPC only protects up to $500,000 and I’ll very likely have much more than that invested just one decade from today. If my brokerage goes under and I have $800,000 invested in my account with them I’d be exposed to potentially permanent losses on the order of $300k. Not exactly something I even want to imagine. Diversifying between brokerages hedges my bets and reduces my exposure to that kind of risk.

So, lately I have been thinking about diversifying my wealth between more than one brokerage firm. There are a bevy of high quality brokerages available to us individual small-time retail investors these days, which is really a blessing all in itself. I haven’t really settled on one yet, but I am leaning towards TD Ameritrade if only because I’m invested in Toronto-Dominion Bank (TD) and TD Ameritrade is an affiliate of that bank. I really enjoy using the services or consuming the products of the companies I’m invested in. And, as always, I walk the walk rather than just talk the talk.

What do you think? Do you like the new FRIP program? Do you believe in having more than one brokerage firm? Why or why not? What discount brokerage firms should I be considering?