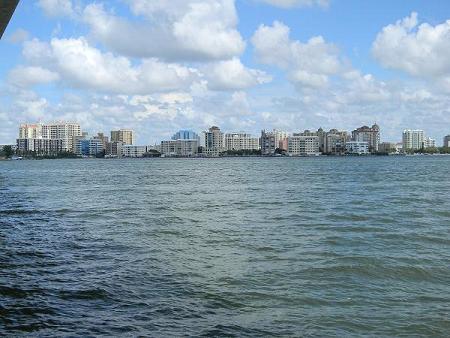 I spent a wonderful summer in Michigan, getting some quality time in with family. It was a very interesting time for me, to say the least.

I suppose I’ve felt guilty about the fact that I had to basically move far away from home and family in order to succeed, and I’ve missed out on a lot of memories in the interim. When I found out that one of my younger sisters was expecting a daughter, my first niece, I started to question whether living 1,200 miles away from my family was where I wanted to be.

But my focus was incorrectly placed. I already had a family in Florida; I met a wonderful woman my very first weekend in Sarasota back in 2009, and we started dating not long after that. We’ve been together ever since, living as a family with her young son. I may have extended family in Michigan, and I grew up there, but Florida is home now.

I’m incredibly lucky in that I have a very understanding and supportive partner, and Claudia understands my reasons for exploring a move up there. We’ve been in close contact ever since I journeyed back to my old stomping grounds. While reluctant, she stayed open-minded about the possibility of joining me in Michigan. So I started documenting possible places for us to live, visiting Grand Rapids at the beginning of August and then Ann Arbor just a couple of weeks later.

But over time, it became apparent that a move back to Michigan just wasn’t meant to be. I faced some resentment from certain family members, and, more importantly, I’ve changed quite a bit over the last few years. I felt like a round peg trying to fit in a square hole, and the more time I spent up there, the more I felt out of place. Claudia tried to tell me why it was a bad idea to move back, and was gently informing me of how different I was from everyone. She knows me better than myself, and she is most certainly my better half. It was an incredible error for me to not listen to her. Furthermore, I see now that I was creating distance between us out of my own selfish desire to try and make living in Sarasota worse than it really was.

The truth is this: I live in a veritable paradise (as I wrote about in March 2011) with the greatest partner a person could ask for. I could have moved anywhere back in early 2009, but I specifically chose Florida because of its fantastic climate, lack of state income taxes, beautiful beaches, sunshine, and plethora of free activities. Once I settled on the state, I narrowed it down to the Sarasota area by a process of elimination: The northern half of Florida is too cold in the winter for me, the Orlando area is too far from beaches, the Southeast side has language barriers and extensive traffic, the far Southwest side has a lack of activities for me along with a much older demographic, and the beaches are better on the west side of Florida, with its sunsets, soft waves, warm Gulf waters, and beautiful sand.

So Claudia and I together decided to stay in Florida, and luckily she took me back after some begging on my part!

This post is a declaration of my love for both a woman and a city. Both have been incredibly kind to me, and allowed me to grow and succeed in ways I never imagined. I’ll be sharing a lot more about Claudia and our future plans together very soon, but for now I’ll be showing why Sarasota is such a fantastic place to finish where I started, and why it offers fertile ground for anyone else out there to pursue financial independence.

I arrived in Sarasota this past Friday before 7 a.m. after driving 18 hours straight. Not fun, but it was made a lot easier because adrenaline was pumping through my system, as I was extremely excited to come back and make both my relationship and my time here in Sarasota better than ever before.

After spending our first day together reconnecting, unpacking, and running a few errands around the city, we used the rest of this past weekend as an opportunity to visit a few parts of Sarasota we had never been to before, and document the time together via a short collection of photos to finally give Sarasota its long-awaited due.

We started our Saturday morning by visiting the local farmer’s market, held every Saturday morning downtown from 7 a.m. to 1 p.m. It’s a great year-round event, where you can stock up on some vegetables, buy handcrafted trinkets, or grab some miscellaneous home goods. We never really spend much money here, but we’re both big fans of walking around and people watching. Claudia ocassionally buys poblano peppers here, which she uses to make a wonderful dish with the pepper, chicken, and rice. 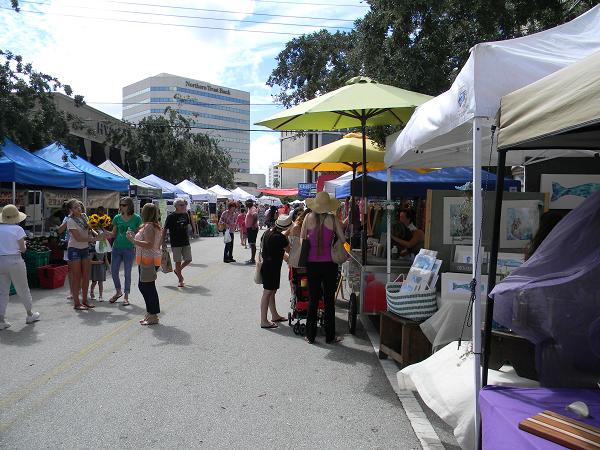 After buying a tiny pumpkin to commemorate our 2014 fall together, we traversed to the north side of downtown, where we dined at a fantastic sandwich shop called Main Bar Sandwich Shop. It’s not much to look at, but the sandwiches are phenomenal and they’re priced right. It’s a local institution, and we had a great lunch here that didn’t break the bank. One of their best sandwiches is called “The Aztec”, which is roast beef, provolone, lettuce, tomato, onions, and this awesome jalapeno dressing. It’s served on a toasted kaiser roll. 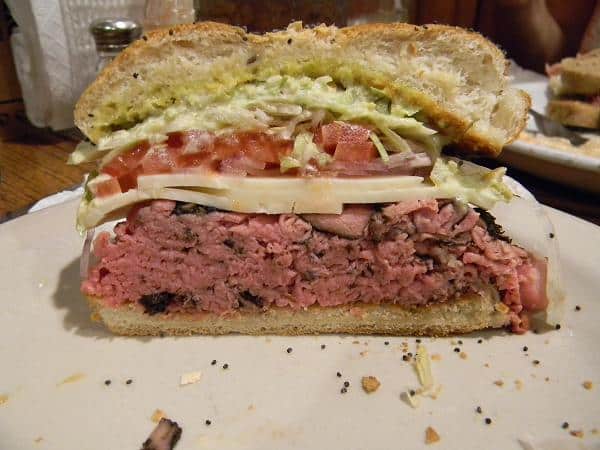 Stomachs filled, but wallets slightly emptier, we then hit up The Ringling. This is a compound that houses a number of museums, largely related to John and Mable Ringling, and the circus. We’d never been, but this past Saturday was Museum Day Live, where a number of museums across the country open their doors for free.

We toured Ca’ d’Zan, which was the Ringlings’s 36,000 square foot winter getaway home, designed after a number of Venetian palazzi. It was a palace, and the history was very interesting. Also on the compound is the FSU Center for the Performing Arts, where the Asolo Repertory Theater performs. We’re anxious at some point this year to go to a performance for the first time. 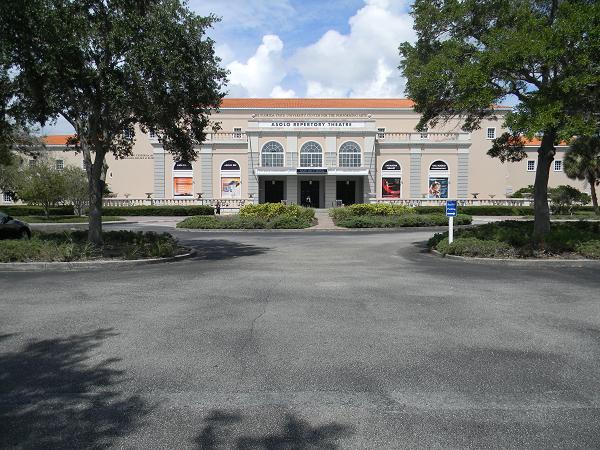 We really wanted to tour the The Ringling Museum of Art, but didn’t get a chance due to weather. A massive thunderstorm came through the area just as we wanted to tour the grounds around the museum and the museum itself, and so we decided to save our visit for another day. I just barely got the shot below in before it started pouring. 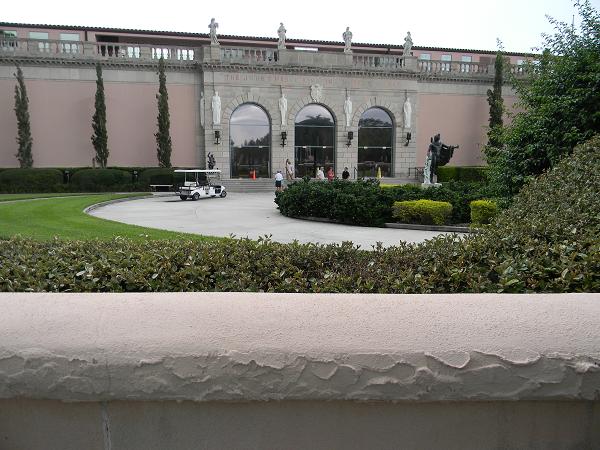 We called it a day after the storm rolled into town. It lasted pretty much the rest of the night, which is a bit unusual for this time of year down here. Generally, we get afternoon thunderstorms that last for a couple of hours and then it’s right back to sunshine. But the last week has been extremely wet, and heavy on thunder and lightning. We finished the night with some pizza and a movie, which is always a great Saturday night for us.

Sunday saw us taking some shots of the downtown area, which is featured at the top of the article. It’s tough to really display the full beauty of the area in this post, as I’m highlighting just a few points of interest. But the city is truly gorgeous.

One particular point of interest downtown is the main bus station. I used the bus as my main method of transportation for more than two years down here, and the central hub is located downtown. I really can’t say enough good things about our local bus system. It can take you almost anywhere in the city, it’s extremely cheap ($1.25 per ride), and I’ve never felt unsafe riding, even late at night. The only issue I could think of is that it doesn’t run real late – the last runs usually occur before 11 p.m. But it’s a pretty solid system for a fairly small town in Florida where most people get by via car. 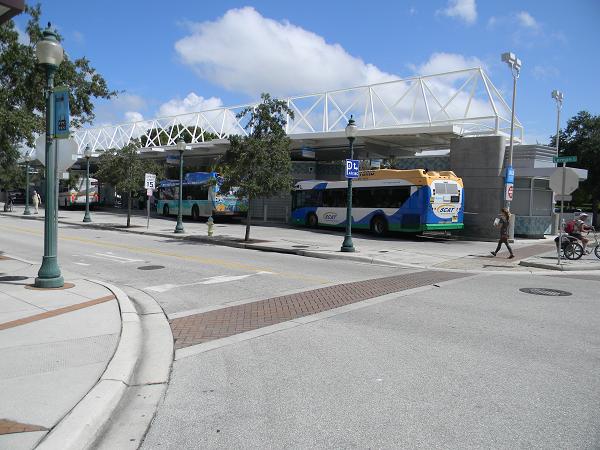 After spending about an hour looking for good vantage points for photos of downtown, we saved the best for last. Driving south from downtown, and then selecting your choice of two bridges takes you to Siesta Key, home of the great Siesta Beach. Designated as the No. 1 beach in America back in 2011 by “Dr. Beach”, it’s really a stunner. The sand is composed of 99% pure quartz, and it’s literally like walking on baby powder. It stays cool in the hot sun, and it’s very soft on the feet. Couple that with the year-round warm Gulf waters that offer gentle waves, and it’s easy to see why this is such a great spot to spend a lazy afternoon. Best of all, it’s completely free! 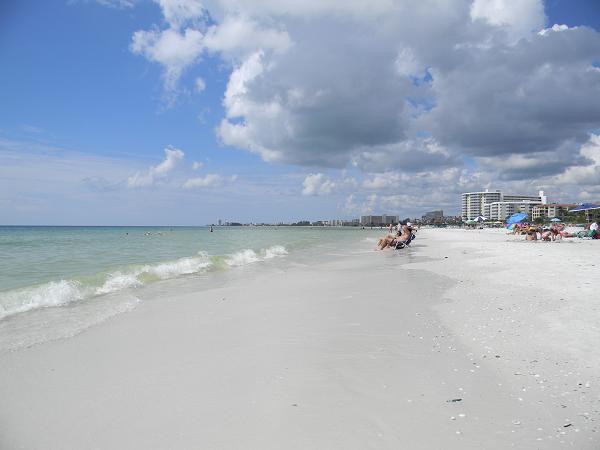 So I finally gave Sarasota its due. I’m going to finish my journey to financial independence where it all began, as this town (and my lovely, lovely partner) has been very kind to me. It’s afforded me a lot of opportunities that I lacked up in Michigan, and I’ll remain eternally grateful.

I’m going to keep the theme going, and list pros and cons to living here. This won’t be for me to decide whether or not to live here (as I’ve already decided to live here), but this may prove informational and/or helpful to others out there potentially interested in living in this city, or perhaps to visit for a vacation.

I personally believe Sarasota is a fantastic place to live and pursue financial independence, notwithstanding my recent indiscretions. I kind of feel like I cheated on the city by exploring some areas up in Michigan, but I think she knows I love her. I’m greatly looking forward to finishing my journey to financial freedom right here where it all began, and enjoying the sunshine and beautiful weather along the way. If the path to financial independence is a yellow brick road, living here means it’s lined with palm trees. Not too shabby.

In the end, there’s no state income tax. Plenty of sunshine. Beautiful beaches. Great weather. Activities (many of which are free) galore. An international airport within the city. Fantastic, cheap dining options. And of course my family is here. I’ll expound on what’s going on with Claudia and I (and her plans for financial independence) in future posts, but in the meanwhile I’m extremely glad to be back home where I belong!

What do you think of Sarasota? Does it seem like a great place to live? Interested in great weather and no state income tax?